The store will not work correctly in the case when cookies are disabled.
SOLD OUT
SKU
870102255
8  Reviews Add Your Review
From New Line Cinema, Peter Jackson and Warner Bros. comes J.R.R. Tolkien’s The Hobbit, brought to the big screen in an epic trilogy. Weta Workshop was thrilled to return to Middle-earth once again, contributing design, specialty props and specialty costu

DWARF SOLDIERS OF THE IRON HILLS™

1:6 scale statue - Limited Edition of 750
Skip to the end of the images gallery 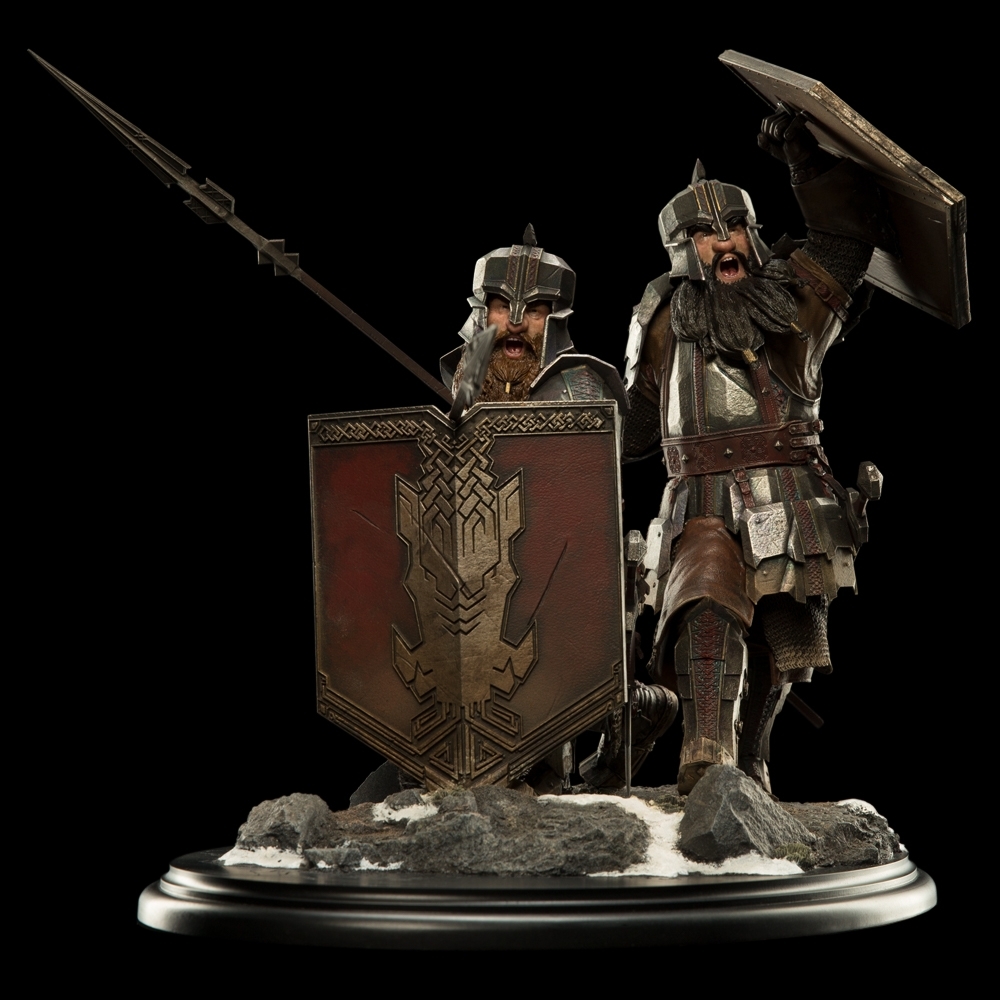 With the army of Mirkwood encamped upon his doorstep, Thorin Oakenshield sent word to his kin in the Iron Hills, that they might march with haste to defend his claim to the treasure of Erebor. Under the banner of his cousin Dain a host of steel-clad Dwarves answered Thorin’s call, pressing on through the night to surprise King Thranduil’s Elves.

Proud, grim-browed folk, the Dwarves marked every past slight or injustice visited upon them by the haughty Elves and arrived spoiling for a fight. Though stout, the soldiers of the Iron Hills were resolute and tireless fighters. Dwarf armour was thick and their shields broad. Beyond the axes and short swords that hung from their belts they carried long, pointed spears to extend their reach and impale charging foes.

Yet, in the face of a much greater evil, the resentment simmering between Elves and Dwarves was swiftly set aside, for the armies of Azog came suddenly upon them, erupting from the ground to make war upon the Mountain. Reforming their ranks, two hosts locked in enmity moments ago now fought as one: a force united by love of life and liberty, standing against the on-rushing tide of savage Orcs.

DWARF SOLDIERS OF THE IRON HILLS

The latest in our 1:6 scale line, the Dwarf Soldiers of the Iron Hills are designed to accompany the Mirkwood Elf Soldier. Although available as standalone statues, we recommend displaying them as one dynamic scene, straight out of The Hobbit: The Battle of the Five Armies.

Simply detach your Mirkwood Elf carefully from his base, connecting his back foot to the epaulette of your lead Dwarf Soldier. In an instant, these warriors of Middle-earth are poised to attack!

What's more, the Mirkwood Elf Soldier & Iron Hill Dwarves make an ideal companion to the rest of your Battle of the Five Armies characters.

Behind the Scenes on The Hobbit: The Battle of the Five Armies