The store will not work correctly in the case when cookies are disabled.
$699.00
excludes applicable taxes
Already in Wish List Add to Wish List
SOLD OUT
SKU
860202636
34  Reviews Add Your Review
Winner of seventeen Academy Awards, The Lord of the Rings was brought to the big screen by New Line Cinema and directed by Peter Jackson. Wētā Workshop was intrinsically involved in the design and physical effects manufacture for all three films. 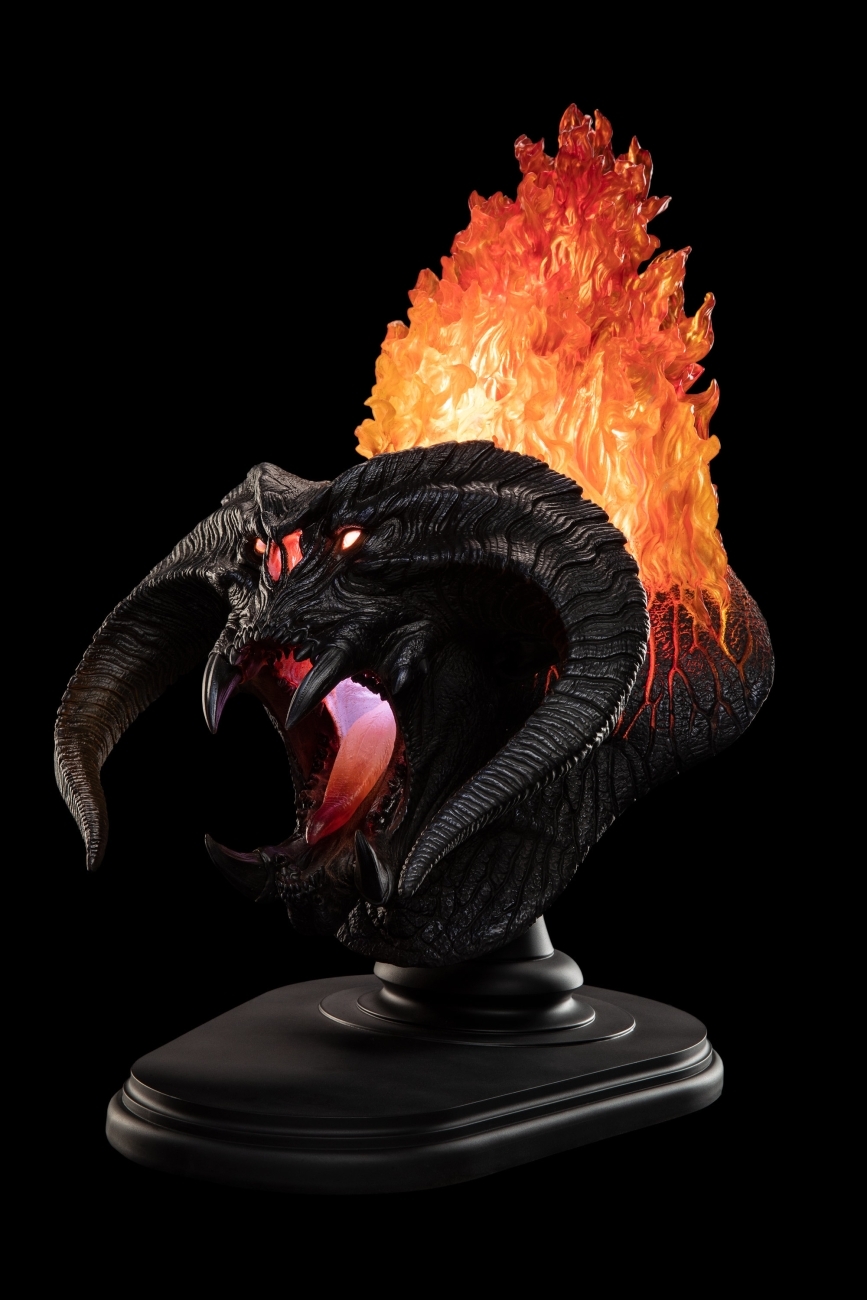 Moria – famed Dwarf kingdom and mine wherein Mithril, rarest of Middle-earth minerals snaked its way through the Misty Mountains in rivers of silver. Rivalling Erebor in its prime, the great Dwarf city of Dwarrowdelf was a celebration of the wealth and power of Durin’s folk. But time alone would tell, the Longbeards delved too greedily and too deep…

The most dangerous foe our heroes would face in The Fellowship of the Ring was the Balrog, and just surviving it would require a shocking sacrifice. While most of the bag guys in The Lord of the Rings were achieved at least in part with some kind of physical element, the Balrog was entirely computer-generated. It’s just not really practical to shoot with giant lava and fire monsters on set!

The Balrog’s final look was the result of a conceptual design phase involving all of Weta Workshop’s designers, 3Foot6 concept artist John Howe, and Gino Acevedo, who began developing creature paint schemes at Weta Workshop and would follow his creations through into the computer generation pipeline at Weta Digital as a creature supervisor. While there were many contributors, the final Balrog design was most influenced by the combined talents of John Howe and the Workshop’s Ben Wootten. As a book illustrator, John had designed Balrogs before, and director Peter Jackson particularly loved the horned, minotaur-like illustration John had done of one of these creatures fighting Glorfindel the Elf for a calendar based on the tales of The Lord of the Rings prequel collection, The Silmarillion. This formed the basis of inspiration for all of the Balrog concepts pitched by the design team for the films.

Ben Wootten’s background studying both art and biology informed his designs and rooted the Balrog in a tangible anatomical reality, while the flaming mane and cracked lava hide imbued it with a supernatural, elemental savagery that elevated the creature above the rest of the trilogy’s less fantastical monsters. It immediately set the Balrog on another plane of seriousness, driving home Gandalf’s point about the futility of swords against such a foe. No matter how courageous the likes of Aragorn and Boromir, they were simply no match for this adversary. Only another being of like power, a similarly immortal spirit from before the formation of Middle-earth, could hope to face down this Demon of the ancient world, but even then. Not without paying a price …

Jamie has spent years with the Balrog - his creation is the work of beautiful nightmares. It was an honour and privilege to paint his version of the Flame of Udûn.

Far beneath the ground, tunnelling for Mithril in sunless black rock, the Dwarves disturbed something that had remained safely entombed since ages past, a being of unfathomable terror, relic of a time of gods and giants, a creature of which the like should never walk again in Middle-earth and for whom there were few equals remaining in the world, a Balrog of Morgoth. A demon composed of shadow and flame, the Balrog could be harmed by no blade or device of Dwarf design. By the hundreds, Durin’s people and the Dwarf King himself fell before the beast, after named Durin’s Bane.

When the Fellowship of the Ring sought to pass beneath the Misty Mountains and thereby thwart the attentions of the fallen Wizard Saruman, it was against Gandalf’s grave misgivings, for the Grey Wizard suspected what haunted in the shadows of Moria. Secrecy alone might secure their safe passage, for if the Balrog were alerted, Gandalf knew their escape would only be bought at great price, and he would not again pass through the Dwarf realm’s doors.

CREATING THE BALROG AT WĒTĀ WORKSHOP

When design work began on The Lord of the Rings in 1997, the look of many of Middle-earth’s most evil creatures was open to interpretation. Loose descriptions in the books, plus rough sketches by seasoned Tolkien artist John Howe, helped guide Wētā Workshop concept artist Ben Wootten in his development of the Balrog. The demonic form took shape almost entirely as sculptures, rather than illustrations.

For Ben, the complexity of the Balrog’s figure, complete with horns and fiery maw, was easier to resolve in 3D form, rather than a 2D image. Director Peter Jackson also responded well to 3D and the freedom it allowed to observe the creature from all angles. One of the very first maquettes of the Balrog’s head became the model for the finished creation. When its body was complete, the sculpture was scanned by Weta Digital to bring the demon to life on screen.

Two decades after he helped design fell creatures for The Lord of the Rings, Wētā Workshop sculptor Jamie Beswarick revisited the Balrog, this time capturing the unfathomable terror as a highly detailed polystone and resin bust. The Balrog’s snarling visage was created using the same traditional physical sculpting techniques honed on the trilogy.

Senior painter Jules German faced the unique challenge of maintaining the Balrog’s flaming ferocity whether the inferno was illuminated or raged unlit. Staying true to the original paint scheme designed by Gino Acevedo, Jules used dark heavy acrylics on the demon’s skin, horns and teeth. High-end automotive paints usually emblazoned across the bodies of hot rods was applied to the demon’s molten cracks and roaring tresses using spray cans and airbrush. The highly-pigmented paints set the colours ablaze whilst retaining the translucent quality of the resin maw and mane.

When illuminated, the Balrog is truly a demon composed of shadow and dancing flame. The Flame of Udûn joins Weta Workshop’s line of creature busts that can be wall-mounted or displayed on an accompanying stand. This collection of fantasy film art is the work of nightmares.

FEATURES OF YOUR BALROG BUST

The Balrog bust can either stand on a flat surface or hang on the wall. Just loosen the bolt, turn its head 180 degrees on its base and fasten the bolt again.

This Limited Edition bust of 666 is made from high-quality polystone and resin, and features unique LED lighting to create an illuminated flame effect. Set your Balrog ablaze using the accompanying power adaptor.

Please note: images are of a pre-production prototype. Each bust is painted by hand and slight variations will occur.