King of the Woodland Realm, Thranduil leads a mighty host of Elven warriors.

When Thorin, the Dwarf king in exile, reclaimed his home from the Dragon Smaug, Thranduil marched upon the mountain fortress of Erebor. With the great army of Mirkwood at his back, the Elf Lord sought to wrest from Thorin his share of the treasure of Erebor, by force, if necessary. Amid the uncountable coins, gold and jewels lay the White Gems of Lasgalen, above all most dear to Thranduil for once belonged to his lost queen.

Clad in shining plate, Thranduil surveyed the long valley and the Dwarves’ towering stone fortifications from atop his great Mirkwood Elk, cold eyes weighing the cost of his bid, confident in the overwhelming might of his forces.

Yet even the far-sighted Elf could not foresee the true toll both Dwarves and his own kind would pay in blood before the day was out, for others sought the wealth and advantage of Erebor. Even as Thranduil and Thorin traded threats, a vast horde of Orcs lead by Azog the Defiler drew near by secret ways. In the battle to come, both King and mount would be tested, and black Orcish iron cleaved beneath blade, hoof and antlers.

Who could forget the moment Thranduil rode into battle astride his magnificent Elk? Sculpted by the masterful Lindsey Crummett, Thranduil on Elk graces our line of high-quality 1:6 scale Middle-earth collectibles. Lindsey was part of the Weta Workshop team who helped bring The Hobbit motion picture trilogy to life, and has recreated this regal pairing for you in polystone.

Behind-the-Scenes of The Hobbit: The Battle of the Five Armies 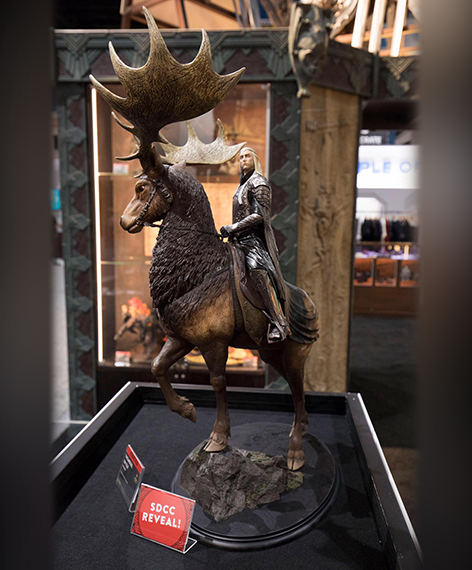